Wow did I watch a band last night seldom is the fact that I have seen a band play with 9 musicians in. This was the first time I had watched Elasticated Waste Band but had heard nothing but good words about them and I was not to be disappointed.

This band was so unique and it really did put some theory into practice about cover versions. Yes a band is authentic when they write and play there own songs but this band couldn’t have really been any more authentic in the way they performed these cover versions It would be fair to say that they pretty much made these songs their own. These nine talented musicians were playing in an area of around 2 by 3 metres so to say they were slightly cramped would be a bit of an understatement. The genre of the music was there was none they belted out renditions of Ah Ha s take on me (yes) I did say that! and the Human leagues don’t you want me baby and they completely got this pub rocking. They went in and out of playing Reggae and Ska with bits from the Specials in there somewhere. Apart from the great covers this band do have their own material as well which is fantastic.

When I first walked in and saw this band the first thing that sprang to mind was how young they were but then as I peeped over the persons shoulder in front of me and saw the whole band I realized they were an array of ages and all very different. There is no certain criteria with this band its all very mixed with styles but one thing is for sure they gel together perfectly but more importantly they were just enjoying themselves so much the phrase ‘kids in a sweetie shop’ came to mind.

So who is this band?

Tucked in the corner playing on a 3-piece drum kit was St Brian,

Bobby Kane who plays bass banjo and vocal had the funkiest base I have ever seen it was a custom made bass guitar/banjo if that makes sense.

Tony “Howlin slim” Rowlett on harmonica and lead vocals with Trevor “the fiddler” on fiddle and vocals.

The mighty Bernard on guitar and vocals and Eddie “the Uke” grace on tenor Ukulele and vocals,

This is a new band although some of them have worked with each other before and all been pretty successful with their previous bands. Bobby and a couple of the boys used to be a part of Speed Circus and Bernard was previously a member of After Noah. I see no reason why this band will not be as successful as any other projects they have been involved with in the past. They have a good few dates coming up soon so I urge you to check out their facebook page and their Myspace for further information and if you fancy a fun filled night of great music then go along and watch them you will be guaranteed to have a great night. Keep up the good work lad’s and I hope to see you’s play again soon. 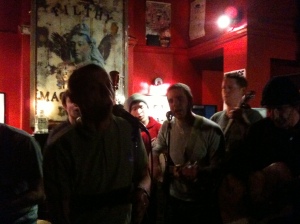 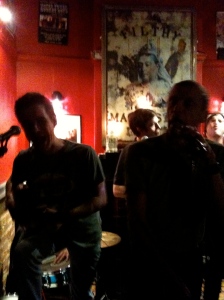 Event Production Manager with a BA hon's degree in Music Management from City University London. Also wrighter of scripts and music blogs.
View all posts by helentucker →
This entry was posted in Uncategorized. Bookmark the permalink.